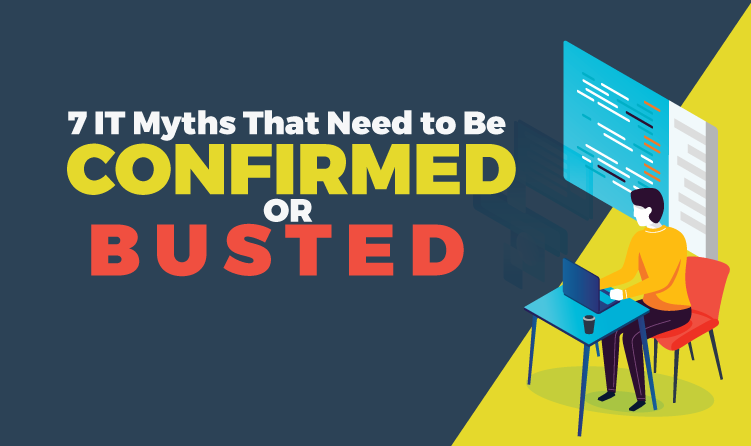 Businesses across every industry have made improvements by leaps and bounds through the integration of advanced technology, and along with it, upgrades in their information technology infrastructure. While businesses like BPO companies have been upgrading theirs, innovators who are steps ahead have revolutionised some processes in their respective industries. The resulting changes have created some myths in the field of IT from companies that are averse to development.

As with everything that involves change, many companies have a hard time catching up. Any significant adjustment disrupts their processes, with those that can adapt or even reinvent themselves leaving them in the dust. In retrospect, traditional views have held true for the past 30 years. But, holding on to them right now means your business will miss opportunities to create and obtain real value from IT investments.

Real value can only be achieved through the alignment of business and IT strategies, and not if you hold on to some of these commonly believed IT myths.

The sudden influx of technological advances has opened the floodgates of innovation. Businesses offering a new way of delivering their product or service have now been tagged as disruptors because of revolutionising the industry they belong to.

Long-established companies, or ‘incumbents,’ are now being affected. The likes of Uber and Airbnb have both changed the transport and hotel industries respectively, with incumbents like Yellow Cab and Hilton Worldwide taking huge hits.

This disruption is affecting every sector, with the incumbents trying to take the necessary steps to stay ahead of the game. While this may be deemed a tight position to find themselves in, they should understand both their pace and the scale of disruption in their own sector to know what course of action they should take.

Disruptors have the advantage.

New digital players with a modern IT infrastructure like a tech support company have been enjoying a considerable amount of success by taking a massive chunk of the market. There is the reason why cab companies have been complaining about the operations of Uber, where governments had to impose sanctions to keep their exponential growth in check. But instead of going against them, the more appropriate action is to hop on the trend.

On the other side of the fence, incumbent businesses have also had considerable success through a robust IT infrastructure and digital applications. They have learned from the disruptors and have combined these learning with their many proven capabilities. Those who managed to achieve this, like businesses in the agriculture industry, shifted from commodity-focused manufacturing to customised services.

An excellent chief information officer (CIO) is primarily a technologist.

Big companies have an established complex IT department focused on running a business on a huge budget. This has posed a challenge for a CIO to be an effective manager who goes beyond the traditional tech design, implementation and operational roles. He or she should not only have a broad understanding of IT and its applications to the company’s business, but also possess exceptional skills and experience that include strategic planning, and both relationship and investment management.

Wins require a bold investment in making a transformation.

Investments will always be associated with risks. The bolder your investment, the higher the risk, but the bigger the rewards.

A business strategy precedes an IT strategy

Back in the day, IT was viewed merely as a business ‘enabler,’ where business strategies and plans were developed and passed on to the CIO, who then develops an IT plan to ‘enable’ these strategies.

Over the years, IT progressively became essential to a business as its role and value evolved. It is no longer a separate entity that follows the business strategy and planning process of a company. Instead, it is a force to be reckoned with, where it can fundamentally alter business models.

Setting up a new business is better than reshaping an old one.

With the appearance of new digital companies that are changing the game, the so-called incumbents are being compelled to take necessary measures so they could still be relevant in their industry.

This presents a dilemma of whether they should reshape an old business or set up a new one altogether. The solution is in choosing the right transformation approach, which gives you multiple options.

An IT infrastructure costs too much and doesn’t create value.

It’s a must for businesses to first understand the reason why there should be an established IT infrastructure that can help run the company smoothly. This is a prerequisite in determining the costs, which would eventually help you realise the investment value.

As soon as you have an effective and efficient IT spend in place, you can focus on creating more value for the company by leveraging on the IT capabilities through cutting costs while improving products or services to help grow revenue.

Essentially, misconceptions and myths in a business standpoint are borne out of ideas that haven’t been debunked yet. But, instead of thinking they exist to discourage you from venturing into the unknown or predict your eventual failure, consider them as opportunities for your company to grow.

With an efficient and effective IT infrastructure in place through strategic planning, you will be able to cut costs, while boosting your revenue dramatically.