One of the things we love about working in a multilingual contact centre is diversity. When you’re working in this kind of environment, you’re naturally exposed to a variety of people, languages, and cultures. Such diversity is good, not only for your professional growth but also for your soul. 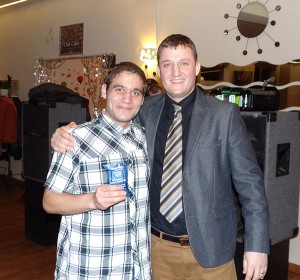 Here at the Debrecen office, we house various accounts that require different European speaking agents. One of the guys who support our Trend Micro account is a 19-year old Swedish-German-Norwegian speaking lad named Benjamin Mandi, who willingly took time to share his story with us. (Ok, maybe not willingly. We had to bribe him with some coffee. And free lunch.)
Over the weekend, during transcosmos Christmas party here at Hungary, Benjamin was awarded the Employee of the Year, a testament to the remarkable work he’s done around here. This article is written based on our interview with Benjamin.
Some of these may be specific to transcosmos, but here are 5 things that are unique about being a multilingual customer support agent, as shared by our own Benjamin Mandi.

Benjamin spent most of his childhood with his family moving from one place to another—Hungary, Germany, Austria, until finally settling down in Sweden for 8 years where he took his elementary and secondary education.
He speaks German and Hungarian as his native languages, but he had to learn Swedish in school which later became his second language. And then he studied in an English high school, where he intentionally learnt and practiced speaking English.
Many of our multilingual employees have almost the same profile—young people who were exposed to various languages and cultures early in their childhood as their families moved around Europe. They didn’t know it at that time, but speaking different languages proved to be an in-demand skillset that paved the way for their future careers.

A natural inclination to help people

On top of language and culture immersion, we believe that this early exposure to various cultures wired them to naturally love helping and working with people.
Benjamin started working at transcosmos early this year. As technical support for Trend Micro, he speaks to customers in Swedish, English, and German. When asked what he loves about his job, he said he’s happy to help customers, and he loves the opportunity to practice all the languages he speaks.

An impressive ability to balance work and studies

Benjamin currently works full-time, studies after work, and does some translating jobs on the side. I think he also changes into his superhero gear when he has spare time.
Kidding aside, most of our agents do juggle work and studies on a daily basis, and we applaud them for that. In fact, we love working with students! They are very determined and disciplined with their time. Some of them get promoted and go a long way in this industry. Surely, these young people make transcosmos a better place.

A keen desire for customer satisfaction

Asked what keeps him motivated in this job? He quickly said, “customer feedback!”
Benjamin loves getting customer feedback and uses this as his motivation to be better, and to keep customers satisfied. True enough, Benjamin does get hundreds of feedback, and this is one of them:
“Dear Benjamin, Expiry date reads as you stated. Looks like everything is ok. Better to be sure than sorry. Thank you for your prompt help. You have restored my faith in Customer Service!”

Benjamin seems to be the kind of person who loves learning. He considers each call as an opportunity to learn and to impart his knowledge at the same time. “Every call is a valuable lesson for me!”
When asked if he loves working at transcosmos, Benjamin answered, “Ye, ‘cause the coffee is amazing.” While there’s no denying that, ehem, coffee here is amazing, Benjamin was also quick to add that he does love being part of a great team where he can continue to learn and use the languages he speaks.
With high regards to multi-linguals around the world, we can certainly attest that speaking different languages requires discipline and the consistent desire to learn.
Thanks Benjie, for taking time to answer our questions. Now have some more coffee! You deserve it.